This is not what career related networking is about…

In my previous blogs I’ve made it clear that networking and relationship building is a crucial part of career transitioning, with over 85% of jobs being placed through people one knows. See below graph: 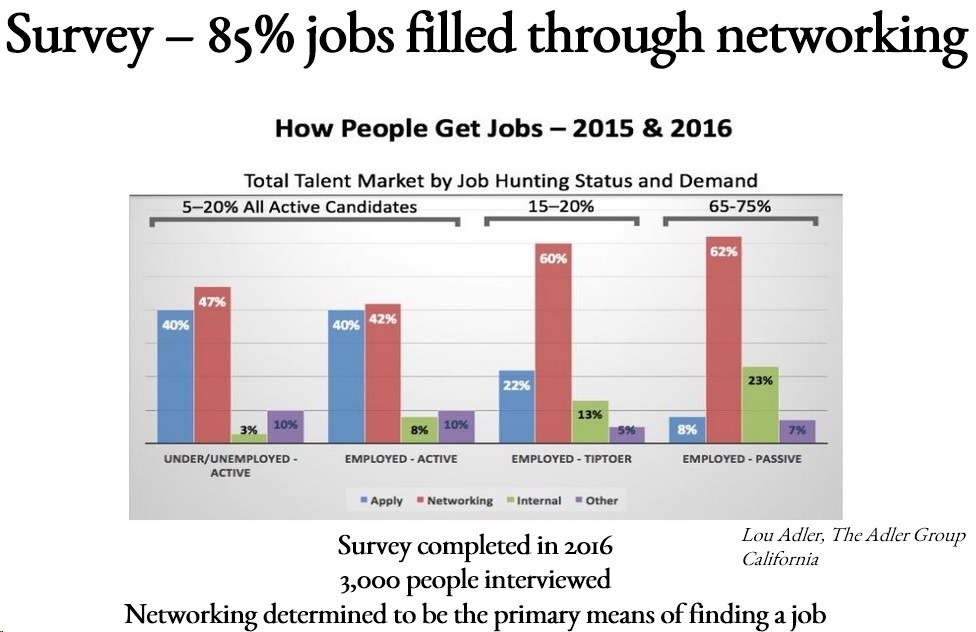 And while networking itself is an art but one which can be taught, let me tell you what networking is not.

To explain this better let me take you back to the time when I was running an industry association called MyElectricalCommunity.

As part of the activities I coordinated, were a series of networking events for engineers across Australia which I initiated.

At these events I called a whole bunch of senior engineering professionals from the contacts I had, as a guide to others looking to leadership, company related and industry related information and career guidance.

These were senior professionals from the power, oil & gas, mining, renewables, manufacturing industries and it was an ideal opportunity to talk and learn.

There would be around 50 or so people within the room, perhaps split say 15 as senior industry leaders (the mentors) available to guide, in relation to the industries and roles they came from and the rest within the room (the mentees) seeking to gain an understanding from them and to potentially building relationships.

And while some of the mentees who came to the event, knew the basics of why they were there, most did not.

So I went to the mentees, explaining that this was the opportunity to be bold and to mingle among the senior group, literally taking bunches of them and introducing them to the mentors – initiating dialogue and then leaving to do this with others.

And then came what I can only describe as the “killing of the goose that laid the golden egg” moment.

Within the first 5-10 minutes of the dialogue came the word “jobs” or “have you got a job” or “is your company hiring”.

And what would happen is that the mentors would often say they had nothing relevant for the mentees as job opportunities and then the networking within that group would dissipate with the mentors excusing themselves from that group and moving on. After all when a senior person comes to guide and contribute to a networking session, they don’t necessarily come with a swag of jobs and they certainly have not come to be harangued about job opportunities within the companies they are a part of.

But what those potential mentees failed to garner was the knowledge those mentors had about the industries they came from, the live projects in their industries those mentors were aware of, the company cultures they came from to determine those the mentees would like to or not like to work for, the possibility for a mentor to build a relationship with the mentee and through that feel comfortable opening up about contacts those mentors had with others within the industry.

The ability to do so much more – all gone to waste.

Now would this happen in the first meeting, even the second meeting where the mentor would open up about their contacts and rich information which could help the mentee?

Do marriages happen through the first or the second meeting? Don’t you need to build trust and relationship over an extended period of time before there is any talk of commitment?

Yet asking for a job from a stranger (who the mentor is at that early stage) who knows nothing about you – seems appropriate?

Can you hold your hand to your heart and say you’ve never done this because I have seen this over and over again in multiple networking sessions over the years.

Maybe not in the first 5 minutes but at the end of the first hour’s discussion. And is the hour enough to build the relationship?

Using the same example of marriage – is that enough time?

Do you have a strategy of determining the profile of who your ideal networking contacts should be. Know about the people getting into the room before you even get into the room. Identifying those you want to target, then approaching them with a set of soft topics before it gets to information exchanges about the industry, to an off line meeting to build trust and relationship? And doing that with a portfolio of 5-7 contacts you focus on subsequently over say a 12 to 18 month period? That’s where the real golden eggs reside.

Having a strategy towards networking is as important as getting into the room itself.

Yes more than 85% of the jobs go through people one knows.

But that’s the important bit – through people one knows.

So what do you do to know the people who can help you? Or give them the opportunity to know you back in return?

If you kill the very possibility of someone being able to help you through rushing to the “have you got a job for me?” do you genuinely believe you are going to get help?

Have you given help to a stranger (say a telemarketer) who calls you and in an opportunistic way, asks you to give them something – whether its a donation or inputs to a survey or the possibility of a sale to them for whatever they are selling? Do you give them anything back in return?

Then why do you expect this in a networking situation?

Remember the goose who laid the golden egg example? Don’t kill those opportunities off too soon.

Happy networking and may all your work be fun! It ought to be if its done right.